Bus companies in US

Bus Companies in the United States

Bus companies in America were deregulated in 1982. Entry into the bus business was liberalized, state regulations about abandoning unprofitable routes were eased and price flexibility for fare was granted.

However, in the 1990s, the long-distance bus industry reshaped itself to serve different markets.

100+ bus companies are serving passengers in the United States. Information for the major bus companies operating across the U.S. is detailed below:

Compare all modes of transportation with ComparaBUS

ComparaBUS, the first bus comparator in France and Europe.

Looking for an alternative to a long distance bus? With ComparaBUS, you can compare trains, buses, carpools and flights in the United States. You can find the cheapest tickets for your trip. You can sort search results by time, company and price. 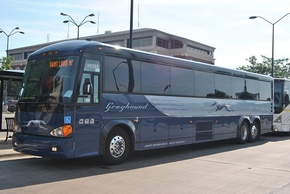 New Greyhound fleet in service for bus routes in America

In 2007, Scottish transport group FirstGroup acquired Greyhound. Almost immediately after, they introduced "New Greyhound", remodeling many terminals, expanding the fleet with new buses and refurbishing old buses. They also started a new advertising campaign with Butler, Shine, Stern & Partners aimed at attracting 18- to 24-year-olds and other demographics to  "The New Greyhound". 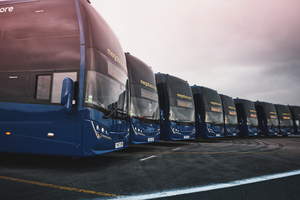 + Information about megabus US

Megabus is a low-cost coach operator in the UK and North America.

It is part of Stagecoach Group, the international transport group, which offers greener smarter travel at great prices. On April 10, 2006, megabus.com, introduced its intercity bus service,  provided by USA/Coach Canada and DATTCO (a non Stagecoach company, under contract). megabus has been providing discount travel services since 2006, operating throughout the eastern, southern, midwestern, and western United States and in the Canadian provinces of Ontario and Quebec. 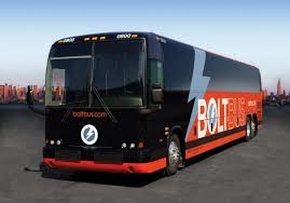 BoltBus: cheap tickets for $1 in the U.S.

BoltBus is an intercity bus carrier that operates at low cost, non-stop and limited-stop, premium level routes in the northeast and western United States as well as British Columbia, Canada. BoltBus is owned by Greyhound Lines and uses the company's operating authority. BoltBus sells $1 tickets at random within the first few seats sold. The $1 fare is the basis for its slogan: “Bolt for a Buck”.

Lux Bus America: exclusive coach travel to Vegas for about $50 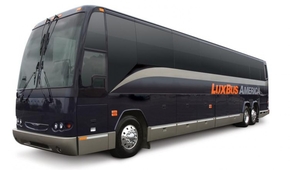 LuxBus America bus tickets ➧
Founded in 2003, the Lux Bus offers coach travel to Vegas for about $50.
Lux Bus America offers tour and transportation services between Las Vegas and Anaheim. In addition to tours, they provide a wide range of other private bus services.
Lux Bus offers; exclusivity by providing a spacious bus for those who want to enjoy drinks, snacks, and more. before arriving in Las Vegas.
They furnish comfortable leather seats which give you the feel of class and exclusivity during your travel from Los Angeles to the famous city. Lux Bus America also offers door-to-door service to hotels which is a plus for many people who use their services.
Lux Bus America bus tickets ➧ 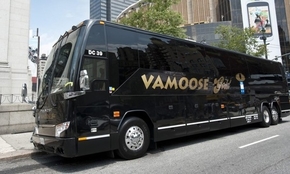 Vamoose bus company started a new luxury service called "Gold Bus" in 2010, targeting business travelers who would pay for exclusive premium services. The fare for the premium service starts at $50.

To get free trips on a Vamoose bus, customers who enroll in the loyalty program can accumulate points by purchasing tickets and after reaching a threshold, redeem the points for a free ticket. 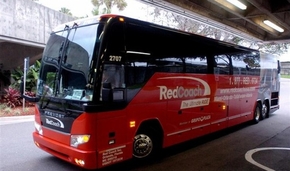 RedCoach provides premium bus rides in some of the major destinations in Florida, such as Orlando, Miami, Ft Lauderdale, etc.

In 2009, the introduction of RedCoach to the United States resulted from the analysis of the public transport of South America and Europe.

Wi-Fi, power outlets, restrooms, air conditioning, tables for computers, and reclining seats which reaches to 140 degrees with extra legroom. You can get comfortable on the new leather seats which have footrests, onboard movies, and more.
RedCoach gives you an affordable yet exceptional experience.

Jefferson Lines: Major bus provider in the heart of the U.S. 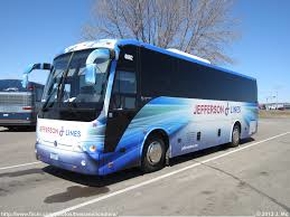 Jefferson Lines is a regional intercity bus provider in the United States.

Founded in 1919, Jefferson Lines was introduced so people could easily and safely travel in the most convenient way throughout the nation’s heartland.

It is also a member of the American Bus Association, United Motorcoach Association, National Tour Association, and many other local visitor associations and chambers of commerce.

Peter Pan: one of the largest privately-owned motorcoach companies in the USA 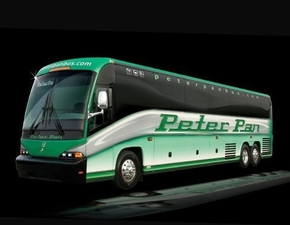 Introduced in 1940, Peter Pan’s name was inspired by the founder’s favorite bedtime story.

Serves 100+ communities in the Northeast corridor of the United States.

FlixBus is the first bus company on the German coach market and was established in 2011 to anticipate the liberalization of the long-distance coach market in Germany.

Leading European intercity bus service FlixBus is heading for the States with a green business model and budget travel with high-quality standards. The company is headquartered in Los Angeles.