Find the cheapest bus tickets from London to Manchester with National Express, Megabus and BlaBlaCar. Bus tickets prices from £8.40. The trip lasts between 4h10m and 5h15m. 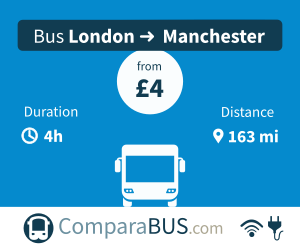 Are you leaving very soon to Manchester? How to find a cheap London Manchester bus ticket?. Your ComparaBUS website helps you to find the best bus tickets. In most cases, the earlier you book, the better the prices. It is therefore preferable to anticipate and book your tickets well in advance.


What is the price of a London Manchester bus ticket? The bus is a really economical means of transport. The London Manchester buses start from £8.40. The bus journey is much longer than the train journey, it will take at least 4h10m. The distance between the two cities is 141 km. To go from London to Manchester, you have the choice between all these companies : National Express, Megabus and BlaBlaCar.


ComparaBUS.com is a unique platform. Very practical, it allows you to see in a single click all the possible transport offers to travel from London to Manchester: bus, train, carpool and plane.


Carpooling and coach are the longest but most cost-effective means of transport. If you don't want to waste too much time, we advise you to take a night bus. Air travel is the fastest but also the most expensive form of transport. However, it is possible to find cheap flights, companies often offer promotional offers. The train is the means of transport that is halfway between bus/carpooling and air travel in terms of fare and duration. To find the best tickets, go to our ComparBUS comparator.


All the information you need to prepare for your coach trip from London to Manchester:

Addresses of bus stops at London and Manchester

Before leaving, remember to check the address of the bus stop. Indeed, the buses of the National Express, Megabus and BlaBlaCar companies do not leave from the same place at London:

National Express is the leading bus company in the UK bus market. Many destinations are offered across the country. Find cheap National Express London Manchester tickets with ComparaBUS.

Megabus is a bus company that sells bus tickets from £1. Over 90 destinations are offered mainly across the UK, including London, Manchester, London, Birmingham, Birstol and Edinburgh. Thanks to your ComparaBUS comparator, quickly view all Megabus London Manchester cheap offers.

Megabus is a subsidiary of the British transport group named Stagecoach. Megabus is a major player in the low-cost bus sector. Find cheap London Manchester Megabus tickets with ComparaBUS.

What to see during your trip in Manchester

Savour the complex culture and history of this north-western city by taking a stroll past its charming architecture, reminiscent of its prolific industrial past. Taking a turn through the trendy Northern Quarter and following the canal’s convoluted journey through the city not only reminds one of the close proximity of the scenic Pennine mountains, but will also lead you to the local pub to try one of their finest craft beers.

Top 3 Places to Visit in Manchester